Yesterday's post says Friday but it was actually for Thursdays date, must have gotten it published after midnight. So I will combine the real Friday news with todays news, somehow I am just a day behind but that is ok.

I woke up yesterday and my back pain was gone. I am so glad because I had a lot to get done. We had a family meeting in the morning, and we made plans to go and see Bryan the day after vacation for a family session and of course to celebrate his Birthday. He knows that he will be in a new room when he comes home, and that decorating it is part of his Birthday present. I was able to get some ideas on the phone last night on what he would like. I can totally work with what he gave me, now to the planning board to get it done for him.

Dennise ended up taking Dorothy and Deanna up to the park since it was so nice outside, and while they were out Dennis and I took advantage of the time and went to see "The Host" which was really good. They could have made it a bit shorter and cut about a half hour off or they could have made it longer and made it into a miniseries. It was a movie that could really go either way. I enjoyed it though.

When we got home we had pizza with the kids, and then decorated our Easter eggs. We went with marbleizing them this year which turned out quite well. You can see them over at What Marksville does for Fun.

We all went off to bed around the same time and awoke early this morning to get ready for the Easter egg hunt that our community puts on. Samantha and Lilly made it just in time. Lilly found a Golden egg this year, but did not want to sit on the Bunny's lap. The girls had their pictures with the Bunny and then we waited for the raffle numbers to be called. We didn't win but we had a good time together. 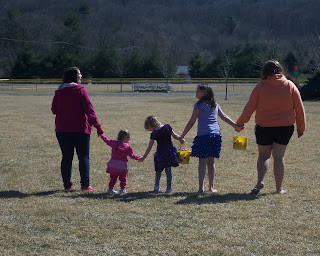 My girls from left to right.
Samantha, my grand daughter Lilly, Dorothy, Deanna, and Dennise.
I dropped Dennise off at play practice and have to pick her up in a few hours, other then that today will be a laid back day, except for doing dishes, and folding clothes.
Posted by MarksvilleandMe at 11:08 AM No comments:

I feel so accomplished today. I was able to get our shopping done, Easter supplies bought, Easter Dinner thought out, the pantry reorganized, refrigerator cleaned out, floors mopped, laundry and dishes done, on top of cleaning out a few other places around the house, all with my back not quite up to par. It feels like my arthritis today and from hearing some other people in our area theirs has been flaring up as well. I guess Spring is on its way.

The kids start their Spring Vacation tomorrow which means egg decorating for us. Dennis and I are really impressed with a new way to decorate eggs this year and actually both started talking about it at the same time this evening. I guess great minds think alike.

Saturday we have the community Easter Egg Hunt which the kids enjoy, and after we have pictures with the Easter bunny. We also put a little money into the raffles for baskets we would like to win. Right after I have to drop Dennise off at Practice for the Musical, and then home for a while to fold clothes, and work on the baskets on the porch that I have yet to go through.

During vacation week the kids and I will continue on working on getting their rooms done upstairs, and putting things away. It is so nice to see their rooms coming together. It has been a long time since there has been order in their rooms, without me doing it all pretty much myself. I am so thankful for the medicine and all it has done for me so far with my Fibromyalgia.

I guess I should change out the laundry and get Dennis his snack before heading to bed myself. We have an early family appointment in the morning, and a full day of activities ahead, as well as having Lilly for the day.
Posted by MarksvilleandMe at 12:33 AM No comments:

It has been a really long time since I have posted and so much has happened here in our family. Samantha was laid off from her job,  she got another job paying minimum wage with in week or so, bought her own car, passed her drivers test, and then just recently she got a another job, making much more, and passed her CNA with a 100. She is now living on her own with Lilly and is doing just fine.

Buke finally asked Taylor to marry him so we will officially have another family member to add to Marksville within the next year. Dennise is doing well in school, her singing is coming along well, and she just picked out her High School Ring. Time just flies by, when you have kids.

Deanna has a fantastic teacher this year and is really blossoming into a young lady. She played Soccer in the fall, and just got done with Basketball, which she really did well with this year. A few of the coaches noticed how much better she got, and several of them have asked for her to be on their team next year. She is also doing swimming after school twice a week which she really enjoys. Since Samantha moved out Deanna has just moved into her old room, and has been busy fixing it up.

Dorothy is Kindergarten and has a wonderful teacher as well. She enjoys school and still loves to snuggle with Mommy at night for her snuggles and stories. She is just getting use to having a room all to herself which is a bit scary for her since she went from sleeping in our bed to sleeping in a room with her sister and now she is by herself, so I am sure we will have a few nights where she ventures into our room.

The girls and I have been watching Little House on the Prairie and they both really enjoy it. We have a few more Seasons to go and we will be done. I hope to get Walton's Mountain Next to view with them.

Back in February Dennis fell on ice at work and had to have reconstructive surgery on his knee and has been in a brace since then. He is off until at least May 1st. It is slow going for the healing but he is right on track the Dr. said so that is good news. Since we are living off of Work Mans comp. we have had to be a bit more careful with our money. When it first happened we had just gotten our income tax so things were a bit easier but now that money is gone and we are just living from check to check.

Around the same time that Dennis fell I finally went to the Dr.'s for all of the pain I have had over the last 6 years and he did a few tests and pretty much thought it was Fibromyalgia, but had to wait for a few tests to come back before he could say without a doubt. I do have Fibromyalgia and I am currently being treated for it. We have seen a lot of improvement although today I am very sore from things I did yesterday.

Holding your Granddaughter while she is sleeping while typing on the computer just should not cause this much pain. The only other thing I did was pick up crayons and colored pencils off of the ground. Those are the only things I did out of the ordinary yesterday. Even though I am in pain today I have had much less pain then I have had in the past and have been able to much more around the house, which is a blessing in of itself. There are things I have been able to get to that have been waiting literally years for me to actually get done, and this is just the start. I have high hopes for the medication and treatment plan that my Dr. has for me which means better days ahead for everyone.

If you go over to my Pam's Fight to Lose Weight page you cans see what I have been up to with my weight loss. I guess that is about it for getting you all up to date with our lives at the moment so off I go to get the dishes done, and pick up the crayon trail that Lilly has made for me again today. Have a great day everyone.

Posted by MarksvilleandMe at 9:06 AM 2 comments: