Here are my last three girls ready for school. Dennise who is in 11th, Deanna who is in 5th and Dorothy who is in 1st this year. as you can see they were up and ready with bells on this year. Last year they missed the bus because the alarm clocks were not set, and we never got the first day of school pictures. 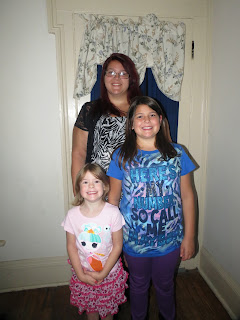 Dorothy needed a bigger book bag so we splurged and bought her one from Pottery Barn that she liked and had our last name printed on it. We would have had Marksville but they only go up to 9 characters. As you can see she is more then ready to get out the door and on the bus. 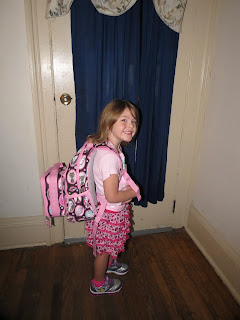 Of course I have to take the funny face pictures so here they all are again. 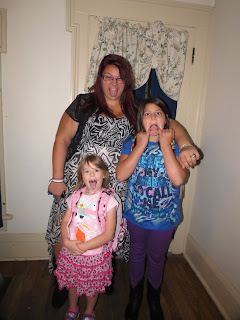 Deanna is ready to go as well. She was all about the cowboy boots this year. She too got a new book bag, but only because it wasn't the right size for Dennise, but she loved it so we kept it. Hers too says our last name on the back. 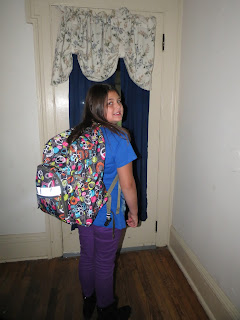 Now the picture I took of Dennise by herself on the first didn't come out well and the bus was outside so she snapped a picture of herself the second day before going out to the bus. The most exciting thing that happened on her first day was a massive nose bleed caused by our blood disorder. She freaked some of the teachers out, while scaring other half to death, and the high school nurse was overwhelmed with the nose bleed so she called the elementary nurse to come and take care of it. Luckily the elementary nurse worked in another school system where this sort of blood disease is well known, so after a call home to make sure they were doing everything they needed for her, everything was fine. I am just a bit upset that the high school nurse was unable or unwilling to be able to take care of a nose bleed, what will she do if it something worse comes along? Anyways Dennise made it through the rest of the day just fine and we were all thankful her cousin Teasha helped her out a bit when it started. 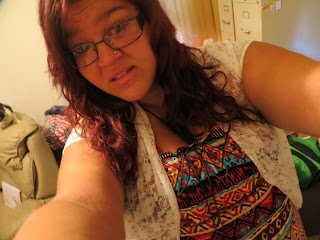 Here it is the night before the first full week of school, and I am just getting this up. The kids started last Thursday with High school pictures being on Friday. Friday I took Dennis to pick up the new machine for his leg, an even though his company pays for it they put the receipt in the box. Just under $1,400. I can't say this enough but I am so thankful to God my husband did this damage to his leg at work because I have no idea how someone who doesn't have insurance for this kind of accident could ever afford to keep there bills paid on top of being able to afford the care they need to heal correctly.

Yesterday Samantha and Lilly moved back home officially. Things might still work out between David and Samantha but not under his parents roof right now, they need time away from each other. Samantha is going to save up to move out into her own place again but as for now she is home again.

Today was the start of Soccer for both Deanna and Dorothy. I didn't take pictures this week but rest assured next week you are in for a treat. Both girls kept the same coaches they had last year which is awesome. Next week Daisies start up again for Dorothy and until Dennise joins anything at school that is about it for us, which will keep us busy enough for a while.

As you can tell there is always something going on in Marksville, so you never know what tomorrow will bring.

Posted by MarksvilleandMe at 7:12 PM No comments:

Prayers for my cousin Mary and her husband Maurice

I realized after my last post I didn't tell you about my visit with my cousin Mary and her husband Maurice when they came to visit from Canada. I am just glad they were able to make another trip down this close to their last trip since I missed out that time. We talked for hours and had a good time, she was even able to meet one of my brothers for the first time.

I would like to ask for prayers for Mary as she is having a bit of a bleeding problem which she was telling me about while she was visiting. Her Dr. had said it was normal and then after she was home for a few days she ended up in the hospital and they confirmed that it was not normal they did some tests, and are going in to take a biopsy, then depending on what they can get out or find they may have to go back in for more surgery. Also a prayer for her husband as he also has surgery planned this month, which means a lot on both of their plates since our family is here in the US, and Maurice just lost his mother a few months back. 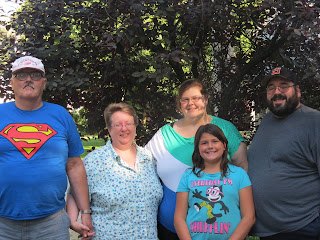 From left to right you have Maurice, Mary, me, Dennis and Deanna in the front. Dorothy was busy playing with the neighbors and Dennise took the picture for us. This also happened to be my mother's birthday which was August 25th, so having family near made it that much more special.


Posted by MarksvilleandMe at 11:47 PM No comments: